What exactly is Dealers/ Troco all about?

For the IOM, CMFD is developed a 13-part serial radio drama to explore issues related to human trafficking, in Portuguese, for Mozambican and Zambian audiences. Each episode is 20 minutes in length, and  produced to a high quality broadcast standard. Through drama and engaging storylines, the series raises awareness about human trafficking and related issues, as well as communicate specific knowledge and skills, such as how to recognise suspicious offers, and what resources are available to turn to for help. The main story focuses on human trafficking, while related issues, identified in collaboration with IOM, were weaved into the story. To engage with presenters and encourage post-broadcast discussion, information and fact sheets designed specifically for radio presenters will be produced.

Why use drama to raise awareness?

Using radio drama and theatre for social change can be very effective, as messaging can be creatively woven into a strong, exciting story. Audiences engage with the issues through their emotional involvement in the story and the characters. By identifying with the characters and traveling alongside them as they face conflicts and make decisions, audiences are also forced to face those conflicts, and live through those decisions.

This idea comes from the social learning theory developed by Albert Bandura. This theory suggests that people learn by:

Communication strategies using drama also draw on participatory theatre and popular education models developed by Augusto Boal and Paulo Freire. By giving people the opportunity to consider behaviours or actions via fictional characters, it allows them to rehearse the behaviour or action in a safe, non-threatening environment giving them the confidence to enact that behaviour or action in the real world. In Boal’s participatory theatre model, audiences literally become “spect-actors,” first watching, then acting out poss ible solutions for a common problem, or dealing with difficult situations by trying new behaviours (from Boal's Theatre of the Oppressed, 1979).

What's the big deal about radio?

Though theatre and radio drama have very different reaches and advantages, they both have great mass appeal, especially in the African context. One of the advantages to radio is that it can reach a large number of people at once, whereas theatre must generally cater to a smaller audience. More importantly, radio relies on oral storytelling, thereby bypassing the need for basic literacy, allowing a message to be passed on in a much more creative way. Storytelling has strong roots in most African cultures, making drama, whether on radio or in theatre, very palatable media. Other benefits to using radio include:

Why is this drama important?

In 2003, IOM's report Seduction, Sale and Slavery: Trafficking in Women and Children for Sexual Exploitation in Southern Africa identified Lesotho, Mozambique, Malawi, and a number of refugee-producing countries as key source countries for women and children trafficked to South Africa. With its history of southward migration flows, instability, porous borders, and weak institutions and structures, Southern Africa is fertile ground for irregular migration, and hosts a diverse range of migrant smuggling and human trafficking activities. The region's young women and children are especially vulnerable to the recruitment tactics of human traffickers because civil unrest and economic deprivation leave them with few opportunities at home, making migration to South Africa, the region's most prosperous country, a credible and appealing lure. Without appropriate language skills, a supportive social network, and laws and customs that she understands, the trafficked person feels isolated and disoriented, and it is this feeling of disorientation that makes her particularly vulnerable to exploitation. IOM has recognised that there is a need to raise awareness about human trafficking and issues that increase vulnerability of migrant women, to sexual abuse, and encourage people to take action.

How was Dealers/ Troco developed? 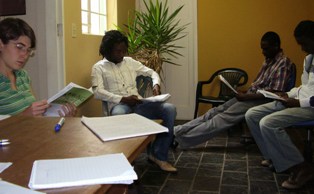 In preparation for the development of Dealers/Troco, formative research was conducted that included interviews with 100 migrant people living in Johannesburg. This research was used to bring out sub-themes like xenophobia, harassment and corruption by police and immigration officials, as well as touch on the root causes of migration. Having first-hand interviews was integral to keeping the story rooted in real experience. The scriptwriters could trust that what they were writing would reflect real situations as they had the stories and experiences of migrant people as a base to work from.

The drama was workshopped in English with a team of scriptwriters, and later adapted and translated into Portuguese for Mozambique. Both the initial story outline and the completed scripts were sent to various stakeholders in Zambia, Mozambique and South Africa for feedback to ensure that the story and characters were applicable to both Zambia and Mozambique.

Careful adaptation was an important part of the development of Troco. CMFD chose to adapt the Dealers storyline rather than create a new story. It is relatively inexpensive to adapt a storyline to another country, thereby increasing the reach of the project without a great deal of additional expense. Producing an adapted drama is also a quicker process since most of the sound effects will be the same, with only a few changes or additions to localise the settings. However, key considerations had to be made to ensure the adaptation of Troco was successful.

CMFD held focus groups in Zambia and Mozambique before recording began to make sure the drama was appealing, exciting, and that the characters and situations reflected reality. Feedback from the focus groups was overwhelmingly positive, with participants saying that they enjoyed the story, and that it reminded them that even though you think it won’t happen to you, trafficking is real.

During the recording, the response from the actors involved was much the same. Interestingly, one of the actors in Zambia had recently been offered a lucrative-sounding job in Canada, and was considering taking it. After recording the drama, and discussing the job offer with other people on the team, she decided the offer was not worth the potential risk, and turned it down.

Though it is too early to make a definite judgment, this may be an indication of the effectiveness of this story, and of radio drama in general, to talk about human trafficking in a way that encourages people to really think about the issues.

The drama also includes an original theme song that both complements the story and stands alone as a strong message for people seeking to migrate to be sure of what they are getting into before they leave home.

Accompanying the drama is a media guide that will give radio presenters or community organisations the information they need to initiate discussion about the characters and the issues they face. Radio stations will be encouraged to have live phone-in discussions after each episode, and CMFD has set up a blog for the drama in both English and Portuguese. The blogs contain images, audio and information about both the project and human trafficking, and can be found at www.dealersradio.org and www.trocoradio.org.