Dealers/ Troco Storyline Summary
Lead and supporting characters are listed with their Zambian names first and corresponding Mozambican names second.
CHOLA/ ESPERANCA – 40, widow, cross-border trader. She is a strong and wise woman, knows everything about trading. Her husband was a good man, and a good husband, but he was also in the mafia and was recently assassinated. She does not know, and believes his death was an accident. The mafia has been watching her closely.

CHILESHE/ SHEILA – 18, Chola’s daughter. She is sweet and kind, and easily sees the good in people before the bad. She is just starting out in the trading business with her Mother. She makes mistakes sometimes, and as teenagers often are, can be very headstrong at times. She is in love with Masautso.

BWALYA/ SOFIA – 28, Chola’s sister-in-law. She also trades with Chola. She is a bit lazy and gossipy, and has only taken up trading because she needs the money. She would have been happy to marry a rich man and never work again. Despite this, she is a good-natured woman, and a good friend to Chola.

MASAUTSO/ JORGE – 22, long distance chicken bus conductor. He is in love with Chileshe. Both his parents have passed away of AIDS-related illnesses, and he is now the head of his household. In his struggle to make ends meet, he sometimes takes unknown packages across the border to seedy areas of other major cities for DAVID, a local mobster. Chola also helps him out when she can.

DAVID/ ANTONIO – Son of the mob boss, Brian Kaluba. He is a reluctant mobster, and hates the work, but feels loyalty to his father. He is not terribly threatening, but people fear him because of his family. He is also in love with Chileshe.

KASONDE/ CELITO – Trafficker and cousin to Bwalya. He has a lot of money, but it’s all dirty. He comes off as a good guy, but he doesn’t actually care much for other people.

PRISCILLA/ ELSA – Sex worker at the brothel. Originally a Lusaka street kid, she was trafficked to the brothel years ago. She has worked her way up to earning certain privileges, is the brothel owner’s current girlfriend, and acts as ‘mother hen’ to the other girls. She has been in contact with an outreach worker, ANGELA.

ANGELA/ ANGELA – Outreach worker for the IOM in inner city Joburg. She is passionate about her job and goes to great lengths to get trafficked girls out of the brothels and somewhere safe. Her husband, worried for her safety, is not always supportive. 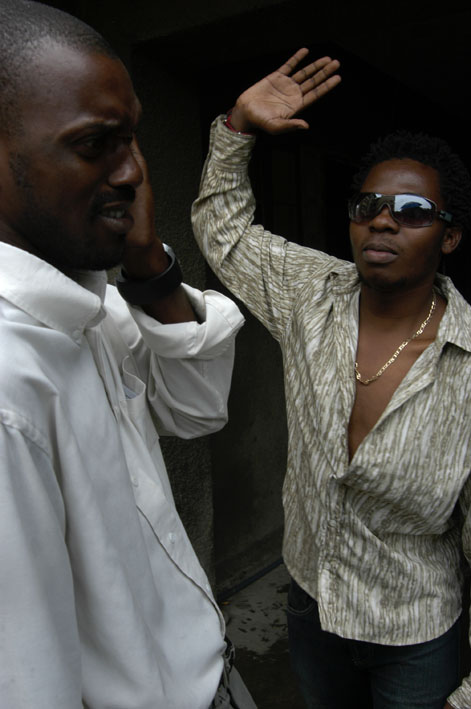 Chola and Bwalya are cross-border traders. Chola’s husband Gallagun (Bwalya’s brother), died 3 months back in a traffic accident, and so to make ends meet, Chola has started taking her daughter Chileshe on trading trips. Chileshe hates trading, but doesn’t mind the extra time she now gets to spend with her boyfriend Masautso, who is the conductor on the bus they usually take across the border.

What they don’t know, however, is that their family holds a secret. Gallagun was involved with the mafia running stolen cars to be fixed up and resold. He was not accidentally killed, but murdered by the mafia for running away with $30 000 cash. The mafia have been unable to locate the cash, but suspect it may still be hidden somewhere with Chola, so they have been watching the family, and have asked the son of the mob boss, David, to get the money back. David is happy to keep such a close eye as he is secretly in love with Chileshe, though he loathes mafia work and is unable to be the heartless, violent person it requires.

Meanwhile, Chola has found the money in a grubby old bag, but hasn’t told anyone about it. She doesn’t know how it got in her house, and has decided it would be best kept with Kasonde, Bwalya’s cousin, since he is already a rich man, and wouldn’t be curious about an old trader woman’s bags.

What Kasonde is interested in is Chileshe. Kasonde is also involved with the mob, and regularly trafficks young women into South Africa. After meeting Chileshe – when Chola brings her to Kasonde’s to drop the mysterious bag – he offers her a job in a dress shop in Johannesburg. He is very charming and hard to refuse.

Masautso, Chileshe’s boyfriend, is also the head of his household. His parents passed away from AIDS-related illnesses and he is in charge of his younger brothers and sister. His youngest brother, Mwila, is sick. Masautso has taken the child to a traditional healer, but Mwila’s cough keeps getting worse. Masautso is forced to ask Chola for money to go for another treatment. After some hesitation, she gives him some money from the grubby bag.

chefeantonio After a suspicious visit from David, Chola begins to have trouble with the mafia. She is being followed, her house gets broken into, and David seems to be turning up everywhere, especially near Chileshe. Conversations with both her neighbour Jack and David are leading her to suspect her husband was not the honest man she thought he was. She fears for her daughter’s safety and decides she should take Kasonde up on his offer to get Chileshe a job in Joburg.

After a sad farewell with Masautso, Chileshe leaves for the big city. David tells Chola the whole truth about her husband in an attempt to get the money back without resorting to violence. He threatens her, but she doesn’t give in.
Masautso is forced to take Mwila to the hospital when the second treatment from the healer doesn’t work. The boy is diagnosed with advanced TB and must stay at the hospital for some time. Masautso is very stressed, knowing he will need more money now. He is forced to do something he hates doing – smuggling small packages of drugs across the border for David. He doesn’t want to do it, but it’s the only way he can make money quickly.

Jack, Chola’s neighbour, is a builder. His wife is expecting their firstborn any day and he wants to buy her a cellphone. However, he is an honest man and refuses to buy a stolen phone, even though it’s much cheaper. While he is working one day, a man approaches him. He compliments him on his skills and tells him about a hospital project in Johannesburg. He needs builders like Jack, and would pay him a very good salary, but he needs an answer now so he can arrange all the papers. Jack agrees to go.

Kasonde has not taken Chileshe to work in a dress shop. He has taken her to a brothel where she is forced to sell her body. She tries to escape, but gets caught. One of the guards beats her and rapes her, saying he’s teaching her a lesson. One of the other girls, Priscilla, takes pity on her. Priscilla was trafficked too, but got out some time back. She eventually was drawn back to sex work because of the money she could get. She has contact with a social worker, Angela, who first helped her escape.
David and the goon his father pinned him with are still trying to get the money from Chola. She comes home one evening to find her house burned and everything in it destroyed. Bwalya arranges for her to stay with Kasonde.

David comes to Masautso with another ‘parcel’ to deliver. This time, the parcel is a women from the DRC (note: in Troco she is from Northern Mozambique). David says she’s a family friend and has a job in Joburg. All he wants is for Masautso to take the girl as far as the border. After some hesitation, Masautso agrees. At the border he has some trouble with immigration officials, but fortunately David gave him bribe money, so he gets through. On his way he sees Kasonde taking a fancy new car across into Zambia.

Jack goes to South Africa. Unfortunately, he never reaches his promised destination. The bus he is on stops at a farm. Jack doesn’t understand what the farm owner is saying to him, but he knows he is not where he is supposed to be. He has been sold into farm labour, and has no way of contacting his family.

Kasonde, thinking he has a buddy in David since they both work for the mob, tells David about trafficking Chileshe and about Chola staying with him. To him it’s a joke. David, who is in love with Chileshe, is horrified and tells Chola. David no longer cares about the money, he just wants to see Chileshe back safe.

Chola decides to go to Joburg to find her daughter. Bwalya catches Kasonde in a lie, and decides to join Chola. Chola 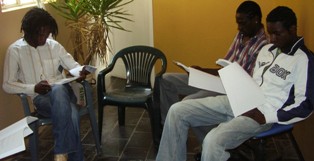 leaves her money with Masautso and on the way to the bus is picked up by the mob, who are tired of waiting for David to act. She is tortured, but tells them nothing. David steps in and saves her, helping her escape the mob hideout, but he is caught in the act, and murdered by a power-hungry goon desperate to impress the boss

In Joburg, the two women encounter xenophobic police and an unfriendly city. Fortunately, a sympathetic cop takes them to Angela, who has been in contact with Priscilla. She locates Chileshe, and with Priscilla’s help, makes a plan to get Chileshe out.

Priscilla takes Chileshe with her to a party at a rich man’s house (the man is a regular client and often asks for several girls for his parties), and helps her sneak out the bathroom window. Chileshe wants Priscilla to come, but she refuses. When she gets back to the brothel, she is severely beaten for helping Chileshe escape. Matola, another girl who had been jealous of Chileshe’s friendship with Priscilla, and who told the brothel owner Priscilla was helping Chileshe, realizes how horrible she was acting, and now feels she needs to get out.

Back at home, both Kasonde and Masautso are being questioned by the mob about the money. Since Kasonde is that last person to admit seeing the bag (which he did not know was full of cash until now) he is told to get the money, no matter how he has to make it. He now has to resort to every scheme he can to make up the cash quickly. Eventually, he is arrested.

Chileshe is back home, and quiet about her experience. She is damaged and depressed. Masautso is trying to be there for her, to be intimate, but she won’t let him. Masautso’s little brother is recovering well. He also tells them about Kasonde’s arrest and the arrest of several mob members who were responsible for David’s death.

The family receives a call out of the blue from Angela. She finally managed to organise a raid on the brothel and got most of the girls out safely. Unfortunately, they were too late for Priscilla, who died after her terrible beating. Matola apologises for treating Chileshe badly, tells her she wants to come back home (she and Chileshe are from the same area) but has nowhere to go. She is also pregnant and HIV+.

Chileshe decides Matola can stay with her. Irene comes by with her newborn baby to ask Chola and Bwalya’s advice. She hasn’t heard from her husband, and wasn’t really clear on where exactly he was going. They tell her a bit about trafficking and what they learned in Joburg. Irene now realises that something bad may have happened to Jack.

Chola tells Chileshe that maybe she can work in a dress shop after all, and tells Chileshe about the money. Masautso tells Chileshe he is totally behind her, that he loves her no matter what has happened, and will do anything to help her. She tells him he can start by getting a bus ticket for Matola.